Our strategy settled on an L1 mint because it helps to promote our chain-agnostic vision. The built-in L2 interop composability is intentional because it offsets the critical gameplay to a blockchain that is architected for this type of interaction, while preserving the security afforded by L1. The additional benefits go much further however, because we can facilitate and ramp the transition of NFT Investors and their capital into Arbitrum and the Treasure ecosystem. The diagram below outlines many of the components of this ecosystem design.

A significant portion of Mint proceeds from L1 will be utilized immediately to invest in Treasure’s Bridgeworld game. We will support the creation of a sub-DAO with the ‘Master Tactician’ role, and provide them an on-chain governance model that kickstarts the transition over to a fully autonomous and decentralized decision making group. This committee of 47 ronin are responsible for providing alpha strategies and making game decisions on behalf of the community. Additionally, all marketplace royalties, some internal game purchases, and individual $MAGIC staking will be compounded into this investment pool.

The Lost SamuRise integration with Bridgeworld is deliberate, and seeks to reinforce existing positive feedback loops within the broader Treasure tokenomics design. We are spinning the flywheel by adding L1 liquidity and incentivizing locked Treasure resources to enhance gameplay. Over time we expect the profile of this Treasury to become more heavily weighted towards increasing engagement and protocol growth, as the following graphic depicts.

SamuRise holders can increase their boosted yields by staking additional $MAGIC within our GameFi protocol. We have introduced the concept of boosted SamuRise, represented as veSamuRise, which keeps track of your modified score when calculating your percentage allocation of all $MAGIC and in-game yields.

The calculation method is captured with the equation:

Calculations per SamuRise holder’s wallet will be derived from your veSamuRise value - not linearly proportional to the number of SamuRise you have staked.

To further assist the reader the following diagram demonstrates the various yield types, how they are calculated, where they can be claimed, and what criteria must be met. The key takeaways are: 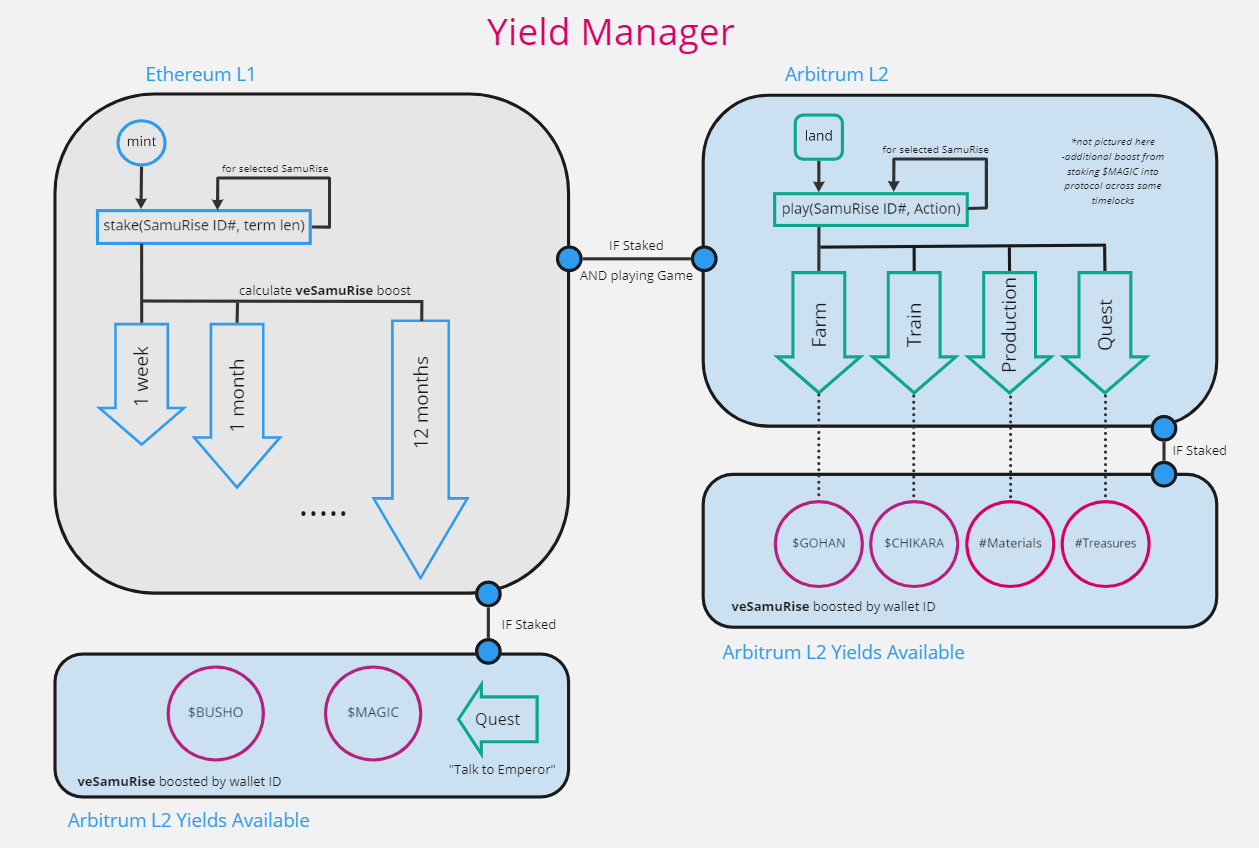 Your base veSamuRise value can be further boosted by staking Treasure resources, creating a dual incentive structure to invest in both types of assets to achieve the highest and most aggressive yield rates available. Since Onna Mushas are a rare and privileged asset in our game world, they will be assigned a better base modifier to all boosted scores. 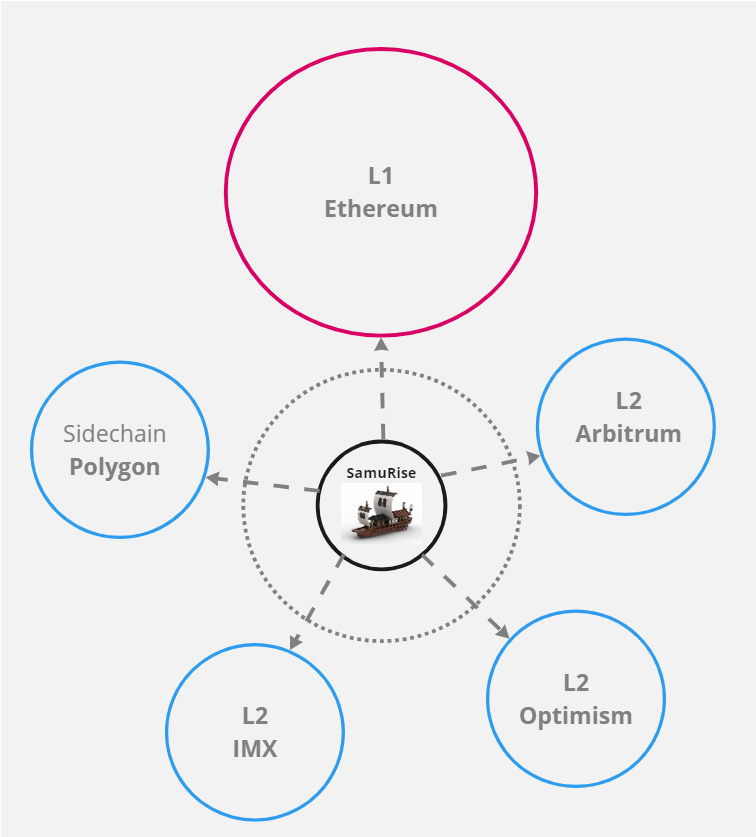 Lifeboats will arrive from 2 possible scenarios: rugs and magic carpets. Rugs need no explanation, but a magic carpet is for those projects that have an engaged and supportive founding team who are seeking to offer value to their community. In both cases, collections on L1 that hop onto our composable lifeboats must fulfill the following criteria.

These whitelisted collections will gain new benefits in the form of utility within the SamuRise metaverse, and $MAGIC yield commensurate with their treasury contribution. All collections qualify strictly for the yield generated through the Treasury allocated by the Master Tacticians, and as part of Bridgeworld guild engagement.

Lifeboats treasury 'contributed' is calculated as 90% of their overall stake in the treasury. 5% is transitioned to the SamuRise stake as a benefit of owning the Genesis collection, and 5% or 2 Eth (whichever is largest) is used by the core team to cover the costs associated with the new integration into the Master Yield Pool, Treasure marketplace, art modifications, tokenomics adjustments, etc. The contributed amount determines the lifeboat community's allocation of the Master Yield Pool, and shall be adjusted whenever additional $Magic liquidity is added, either from subsequent Lifeboat partners or from Royalties. For example, if a lifeboat partner initially contributes 10% of the overall pool (after fees), all their holders draw 10% of future yields. When the treasury expands, the allocations are recalculated to adjust for a declining portion of the pool, so in the example above, a percentage less than 10 is very likely.

The planned utility within SamuRise centers around the Farm and Produce Actions, and although not as efficient as SamuRise, these approved NFTs can be set to work as peasant farmers/Miners/Lumberjacks on your land. This, of course, allows your SamuRise to spend their valuable time elsewhere.

The technical implementation for this Lifeboat primitive will have the following design details:

Where it makes sense to SamuRise gameplay, we will pursue direct integration with the resource economy of other Treasure ecosystem collections. Cross-partner integration backed by a native AMM adds a strong multiplier to the overall economic flywheel and substantially boosts Metcalf's Law. As part of our strategy we will be seeking ways to integrate Smolverse, Battlefly, and others into our metaverse. The idea of world-building to accommodate new Factions into our gameplay from other NFT franchises is far too exciting to ignore.